My Experiments with Truth …

Home / Blog / My Experiments with Truth …

After my 2nd 10 day Vipassna Shivir at the global pagoda, something inside of me feels compelled to share my experiences with as many people as I can reach out to.. the choice is to either sound deep and profound at the risk of ending up sounding preachy or use my own words, keep it light and engaging, maybe a bit flippant even .. I chose the latter.. so here It is …

MY EXPERIMENTS WITH TRUTH
(Ok half truths, ok ok half ‘baked’ truths.. ok seriously shut up and read on!) 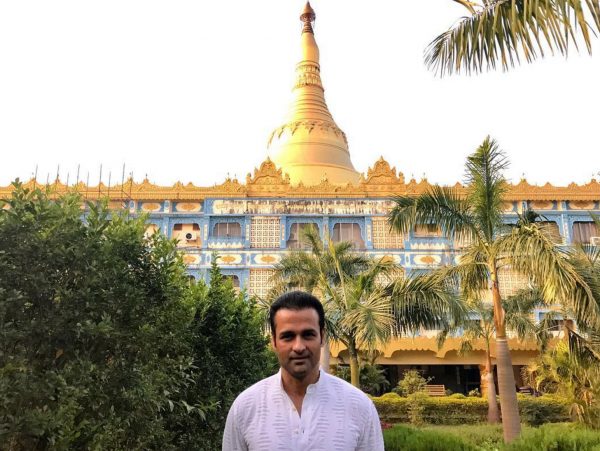 THE PATH TO ENLIGHTENMENT…..
Several moons back, a bloke called Siddharth Gautam left his royal abode n took off on a quest to find Moksh/enlightenment .. he was clearly miserable when he saw the anguish caused by the actions of his own while fighting wars, poverty, etc etc.. after moving from place to place , he had his Eureka! moment under a tree in Bodh Gaya! (Technically Einstein came much later but still). And he was rechristened Gautama Buddha … He helped millions post that on their quest to moksh till he left his earthly body some 2500 years ago.. the method he used is called Vipassna where u look into ur ‘self’ to rid urself of misery n ‘sankharas’ ( sanskars, good and bad)

My very first day at the shivir, I realised I wasn’t going to become Rohit Buddha anytime soon!! Not in this lifetime , not in the several that will follow.. And I didn’t want to!! Hell no! I wanted to feel happily gleeful when I say my Christian Louboutins which were delivered to my house while I was away.. i want to feel bad when my little one grows up and moves away to a far off land to Grad school.. I want to jump up and down n shout out loud every time I win an award etc.. basically, I want to live life!! So I started thinking what the next best thing would be for me to do considering I would be there for 10 days observing ‘noble silence’, waking at 4 am everyday, meditating for 8 hours daily and sleeping for 2, max 3 hours a nite..

I decided to imbibe whatever Guruji Shri S N GOENKA ji was teaching and try and use it in my everyday life when I got back..
here’s what I came back with..

1. Forgive..
Forgive whoever u has upset/hurt u coz holding on to the pain/frustration will only make u miserable .. don’t forgive thinking u r the better man for doing so but forgive because it will give u peace.. and that peace will reflect on the other person as well

2. Equanimity..
Life will throw at u a whole lot of challenges at every turn.. it’s up to you whether u want to meet it with a smile or a furrowed brow.. a smile on ur face will make it easier for u to deal with the issue coz ur mind will be at rest n thinking more clearly.. a crinkled forehead will only add to the discomfort..

3. Happiness..
not your own, but others !! Think about this.. u stop at a signal in ur swanky new car n are feeling pretty good about it.. u see a grubby yet cherubic 3 year old beggar child playing with his raggedy doll who looks up at you and flashes the most adorable smile at u for no reason.. u smile back, take a few forgotten coins from ur ashtray, n hand it to him.. u r feeling ‘charitable’.. he holds the coins in his hands knowing not what they are and has a quizzical look on his face.. his mother quickly comes and retrieves the money and folds her hands as gratitude. He keeps smiling .. now u reach for a packet of biscuits n place it on his open palm.. the lil buggers face lights up and he smiles the happiest smile at u which would gladden the heart of a monster even.. now u r feeling truly ‘happy’.. for a moment u have forgotten about ur gleaming Ferrari n are basking in projected happiness .. that’s the secret to a better world. Doosron ko Khushiyan do, it’ll come back to u many fold..

4. Everything is impermanent … anittya.
What it means is that jo Abhi hai woh kal nahi hoga Aur jo kal hai woh kuch der baad nahi hoga.. neither happiness or grief.. so enjoy ur happiness right now and revel in it and don’t let ur grief weigh u down too much coz that is also impermanent … most beings live like they won’t die and when they die, they haven’t really lived.. stop running the Race.. stop ‘saving up’ for tomorrow.. life is in the today.. so live it ..
and finally, my most important reaffirmation..

5. Mantra of life..
Tera mangal, Tera mangal ‘SABB’ ka mangal hove re…
pray for the of people around u.. pray for the eradication of misery of everyone, not just u.. and feel a gush of happiness when ppl around u achieve the success they want.. what’s the point in ur being successful when ur best friends are going through bad times.. who will u share ur happy with?!

Must add that I have lived my life holding this mantra close.. most of my friends( minus 1 maybe 😜) will vouch for the fact that I’m always happy when they do well..

CONCLUSION
I hope and pray that every one between 20 and 45 gets the opportunity to attend at least 1 such 10 day vipassna course sooner than later.. yes yes I said 20 coz what’s the point of learning how to live life when u r 60! It’s a popular misconception that vipassna is for the old!! No sir! It’s for the young .. so that u can lead a more fulfilled life.

Additional footnote..
I finally discovered my original walk !!!! For the better part of the last 2 decades I’ve been walking around like a combination of amitabh bachchan and Sanjay dutt depending on the occasion.. if I’m entering an awards function or some such, wife in tow, it’s AB.. if I’m entering or exiting a party, it’s Dutt!! Always works, u know what I’m saying ?? 😜

The realisation was a bit unsettling for me though.. I walk like Amol Palekar 😱😱😱

HUMOROUS FACT..
Have any of u ever seen the inside of a mental asylum?? No need, just check out a vipassna centre!! Picture this!! 20 dudes staring at various parts of the sky for minutes without blinking.. like it was going to fall or something !!! Or walking around in circles around a small garden at a very brisk pace or tediously slow!! Only difference is that here we were doing it out of our own volition coz we had absolutely nothing else to do but walk and retrospect n there, 19 of those whack jobs are following the 20th thinking he’s going to lead them out of the asylum !! 😬

Disclaimer:
Please take the humour as it is intended.. no offence meant , esp to people with mental illnesses.. I believe those are the worst kinds..