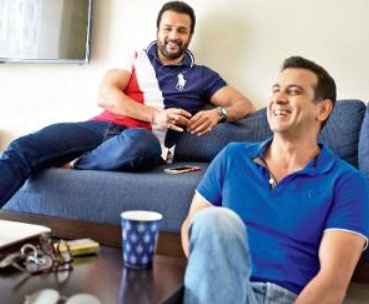 The actor-director siblings have had chequered careers. While Ronit Roy has revived his film career, Rohit is hoping to build a new one behind the camera.

At present, the Roy brothers are in a “comfortable space”. Apart from being one of the biggest names in the television industry, Ronit has been praised for his performances in critically-acclaimed films such as Udaan, Ugly and Kaabil, while Rohit has refashioned himself as a filmmaker and will helm the next Sanjay Leela Bhansali production.

Growing up in Ahmedabad, Ronit had earned the moniker ‘Kumar Gaurav of Ahmedabad’ but Rohit remembers him as the most flamboyant man in town. “You need money for that. I was only an extrovert,” says Ronit, before he is corrected by Roy junior, “You can be Jackie Shroff from Teen Patti, so you can be flamboyant without money.” He also adds that his elder brother also had the reputation of being a “quintessential naughty boy”. “If I got into a scuffle in Ahmedabad and they came to know I was Ronit’s brother, they’d run away,” he says.

Rohit, who was preparing for his MBA when his brother bagged his feature film debut in Jaan Tere Naam (1992), remembers visiting him during a song shoot at Andheri Sports Complex. “He was in swimming trunks and the actress was in a ridiculous purple bikini and they were jumping in and out of the pool. I returned home to tell my mom that her son was doing sleazy films, wearing just a chaddi.”

Ronit signed 40 films following his debut, “of which, 25 producers never showed up, 15-16 went into production, 13 got made, half didn’t release and the ones that did, flopped.” He continues, “I wanted to be a hero when I came to Mumbai and all the trappings that came with it — big house, big car and girls running after me. I got all that with Jaan Tere Naam and then I lost it too. Now, I want to become an actor, and not a star,” says Ronit, who will be next seen in Sarkar 3. “May be, I signed the wrong films. When you’re 26, you don’t know any better.”

Ronit, who won a Filmfare Award for his performance in Udaan, eventually turned to television as a means of keeping his acting career alive. He began with a show opposite Bhagyashree before Ekta Kapoor cast him in Zee TV’s Kammal in 2000 and later in Kasautii Zindagii Kay and Kyunki Saas Bhi Kabhi Bahu Thi in 2002. “I was initially paid Rs 2,500 a day. I felt that if I could make Rs 50,000 a month, it would pay for food, rent, alcohol and mobile bills.” Instead, Ronit became an overnight primetime success. From 2002 to 2010, he worked on a minimum of three TV shows every year and “couldn’t spare time for films”.

Rohit, who admitted to scoffing at his brother’s profession initially, was left adrift when his US visa was rejected in 1992. Prior to his entrance test at Symbiosis, Pune, a chance meeting with Kunal Kapoor, an advertising maverick then, resulted in a move to agency life and he reluctantly strayed into modeling too. “Anant Balani, who had made Patthar Ke Phool, saw my photographs, which were terrible, and called me for a screen test, which was even worse. But he liked it and that’s how I got my first film with Suchitra Krishnamoorthi called Jazbaat which never released,” says Rohit.

A year later, Rohit shot to fame with his TV debut in Swabhimaan. “I was rejected during my audition by Shobhaa De, who wrote the show. She felt I was ‘too MTV’ to play Rishabh Malhotra. She wanted someone like Mohnish Behl, but younger. Later, Mahesh Bhatt, one of the makers, spotted me while going through the rejected auditions, and because of my red jacket he placed his bets on me,” he says.

The Roy brothers’ up and down relationship with success caused some problems for their mother too. “During Swabhimaan, when Ronit was totally out of work, people would tell my mother, ‘we saw the show, but bada beta kya kar raha hain?’ Then, the same phase came in my life in 2013-2014, and they’d ask her, ‘we watch Adaalat but chota ladka kya kar raha hain?’” Rohit says with a laugh.

These days, Rohit has chosen to get behind the camera because it is something he had “always planned to do” but was also in part due to his stuttering acting career. Rohit says he has made peace with the fact that he is “not a star”.

As it happens, Ronit will be playing the lead in the Bhansali love story that Rohit will direct. The younger Roy shares his first choice for the lead was Naseeruddin Shah. “I hated Ronit’s work in Jaan Tere Naam even though the film made him a star. But when I saw him in Udaan, I cried and then I saw him as the gritty cop in Ugly and I was sure that only he could play the character I had in mind.”

So the next time someone asks their mother what the brothers are doing, the answer will be easy.